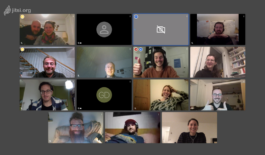 On of the first virtual plenary sessions at TRINK-GENOSSE

It's the year 2020. After a rather short period of regular life at the beginning of the year – we almost already forgot what that feels like – shit hits the fan. Bad. Corona enters the picture. Public life comes to a grinding halt. Real-world social interactions become irresponsible, risky, and generally undesirable. This new norm creates a problem that is overshadowed by general confusion, excitement, and anxiety, but which becomes more and more obvious with every day of the shut down: We need social interaction. In general, but especially to cope with times like these ..."

Ok. dramatic intro over. But still: The realization about the increased need for social interaction is very valid and becomes increasingly important as the pandemic remains present in our lives. This also applied to members of the cooperative bar project TRINK—GENOSSE , which some of us are part of. When the shutdown struck Germany we were only a few days away from pre-opening our bar. Finally. After over a year since the project was successfully crowdfunded in November 2018. After countless hours of conceptual, administrative, and physical labor; most of which took place in real-world meetings (isn't it weird that nowadays you have to clarify that a meeting was not remote!?) With over 130 people waiting excitedly to celebrate their collective achievement in their very own bar.

Soon it became apparent that remote collaboration was going to be a major part of the project for some time. We needed to find a way to keep this group connected. A group that is not naturally at home in zoom-calls and remote white-collar work. Within days we successfully moved all possible meetings, especially the weekly plenary session, to the virtual realm (this is when JITSI became a household name for many group members). 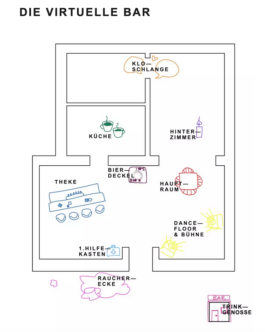 Each area is linked to a jitsi room. The floorplan represents the real space.

Immediately, we saw the apparent need for social interactions that aren't work-related. Some of us already had moved their regular after-work meetings to jitsi and other members stated, that they are very happy to have the plenary sessions as it was their only regular interaction with others outside of work. So as a quick fix TRINK—GENOSSE established the very first VIRTUAL BAR; a number of permanently opened jitsi rooms, that can be entered via a playful interface, based on the floor plan of the real bar. Counter, dance floor, toilet cue, smokers corner, and so on.

Video-call tools are designed to get work done

But even though this solution helped people to mingle remotely, the next problem was just around the corner. Meeting and conversing with people worked relatively well in a moderated work environment. But the more informal the conversations got, the more apparent it became that the array of current video-call solutions did not allow life-like dynamic interactions as they would happen in real life. No simultaneous talking, no side-conversations, no whispering, etc. Everything seemed to be developed for moderated and/or orderly work environments. This shortcoming not only proved to be uncomfortable and annoying but even problematic, as these circumstances regularly hinder the inclusion of less experienced, insecure, or introverted participants.

A small group of interaction designers, devs, and friends shifted their informal after-work beers first to jitsi, then to the TRINK—GENOSSE virtual Bar. And of course, we discussed the same idea as probably thousands of designers and developers during the first lock-down: That this would be a perfect topic to prototype how we can support human interactions differently. With the goal to identify and design interactions that support informal, unmoderated gatherings and the needs of us people in a time without much personal contact. (Update: Yes, many folks discussed the same ideas, some started prototypes, some started companies. More here.)

In March 2020, we started some first drafts on napkins, searched the web and saw, that there were no applications that supported informal video calls and spatial sound (or at least with an accessible, simple interface). Luckily friends told us, that the Prototype Fund was just about to close its application for round 8. A good fit, as it was our aim to explore a prototype based on the jitsi app, as it offers a decentralized infrastructure and to build an open-source application that is accessible for and extendible through others. So we were more than happy to learn, that we receive funding from Prototype Fund from September 2020 - February 2021. 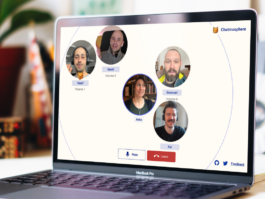 How it all started … 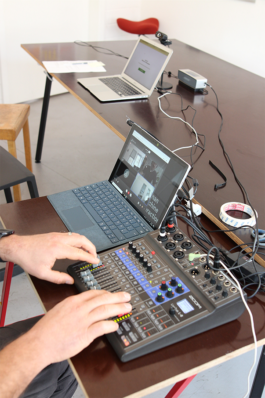 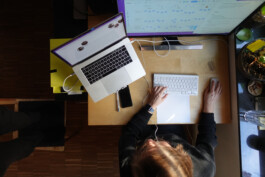 Our demo is a prototype. Your financial contribution helps to cover maintenance costs and bring new features to Chatmosphere. 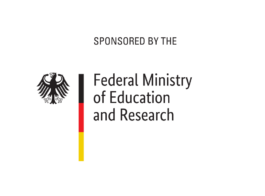 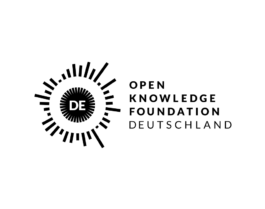 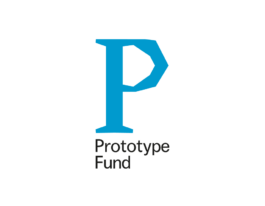